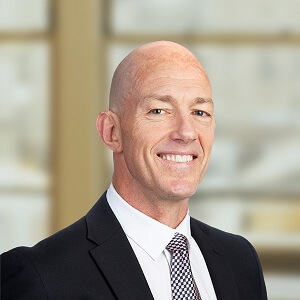 Tom Wood is an Associate Director at FC Lawyers within the business and commercial property team with extensive experience in a broad range of areas. He is recognised for his strategic advice and attention to detail when analysing issues. Tom has a loyal and impressive client base many of whom he has acted for over 20 years.

He attended the University of Queensland and completed a Bachelor of Arts and Bachelor of Laws degree. He worked at a major national firm in Brisbane, and was admitted as a Solicitor in 1992.

Tom is a Life Member and a past President of the Suncoast Community Legal Service, Queensland’s largest voluntary legal advice service. He has been on the volunteer roster there since 1993 and has also been a Visiting Lecturer at the University of the Sunshine Coast.

Tom plays rugby and is a Life Member of Maroochydore Rugby Union club, of which he is also Honorary Secretary, and a past President and Club Captain. Tom has also been involved in surf lifesaving since childhood. At Mooloolaba Surf Life Saving Club, Tom is a Long Service Member, rows surf boats, is on the Supporters Club Management Committee and the Judiciary Committee.